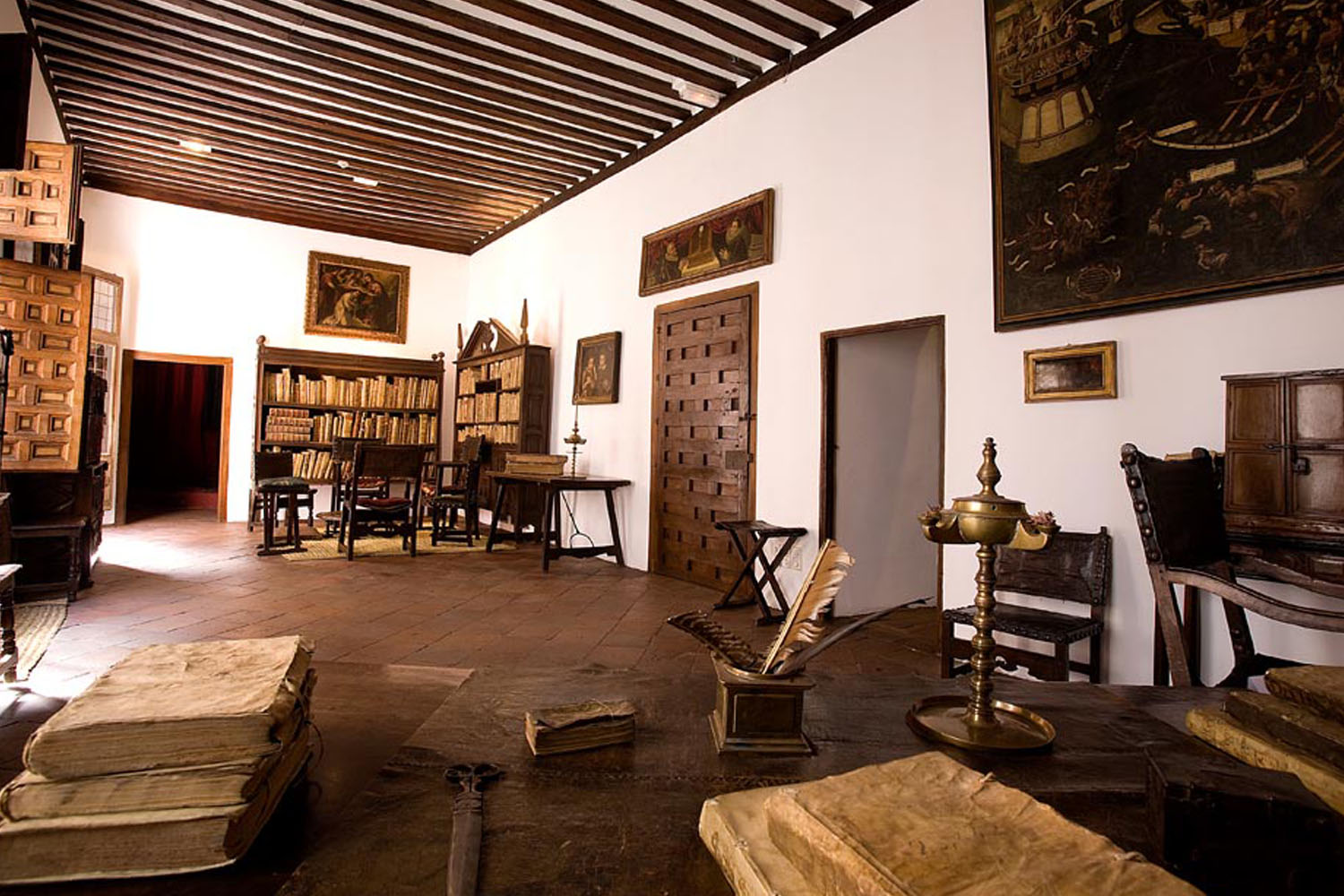 Madrid has it all (or nearly all): history, culture, sports and a city like this cannot let visitors leave without knowing our cultural richness and variety, as far as museums are concerned, but this time, we do not mean the most famous located in the 'Paseo del Arte', but some other lesser known but important and curiosities that will not leave you indifferent.

Madrid has more than 120 museums, many of which are little known to the general public but have a rich culture. Here we propose a list that will surprise you:

Museo Geominero
This museum is housed in the headquarters building of the Geological and Mining Institute of Spain and was declared of Cultural Interest in 1998 Their goal is to preserve, research and disseminate the richness and diversity of geological, paleontological and mineralogical heritage, and it, we can find a collection of minerals, rocks and fossils from all Spanish regions, and around the world. A tip, do not miss the stained glass window located in the central room, one of the most stunning Madrid.

Museo de Informática García-Santesmases (MIGS)
Located in the halls of the Faculty of Computer Science at the Complutense University of Madrid, receives its name in memory of Professor José García Santesmases, professor of this university that was a pioneer in the research and teaching of Computers in our country. In it, machines developed at UCM, between 1950 and 1975, as well as commercial computers since 1968 were in use in the Computer Centre of this University and equipment donated by departments, individuals and other entities are exposed.

Museo de Aeronáutica y Austronáutica
Located at the Cuatro Vientos Air Base (Madrid), if you don't already know come because it has a curious exhibition divided into seven platforms on the outside where you can find up fighter jets, seaplanes and helicopters going through. Also, highlight unique pieces as Villanova-Acedo, which is the oldest airplane remains in Spain, the German Bomber Heinkel He 111 E-1 and the gyro C-19, designed by Juan de la Cierva, who flew the first time in 1932.

Museos Mancomunidad Embalse del Atazar
In an environment of great wealth as is the Reservoir Atazar, could not miss a museum that will enhance their tourism resources. That is why they have created a museum for each municipality; found the Museo de la Piedra, housed in a former laundry in Mangirón, the Museo de los Sentidos in Cervera de Buitrago, the Museo de la Fragua, located in the ancient Forge in Paredes de Buitrago, Las Eras de Trillar, located in the northern municipality of El Atazar, the Museo del Agua y Patrimonio Hidráulico, located at the headquarters of the Commonwealth Atazar Reservoir, in El Berrueco, Museo de Juegos Tradicionales located in Serrada de la Fuente, Museo de las Formas de Vida del Pasado, located on a site of ancient Tejera of Robledillo de la Jara, and finally the Museo Aula-Geológica, which is located in Patones.

House Museum Lope de Vega
Located in the Barrio de las Letras, we found the house where the writer lived his last 25 years and represents the traditional residence of the XVII century. Inside, several paintings lent by the Prado Museum. A must visit if you want to know how life was Lope de Vega in the Golden Age.

Foundation Carlos de Amberes
The Foundation was born in 1594 thanks to the legacy of Carlos de Amberes. Its main objective is to build a common cultural space for Europe. It is located in the Church of San Andres de los Flamencos, has been declared of cultural interest in the monument category. His extensive Agenda includes exhibitions, concerts, conferences, and even cocktails and gala dinners.

Museo de la Farmacia Hispana
This is another little known museum in the capital, located in the district of Moncloa. Highlights include collections of ceramic jars, boxes painted wood, and generally objects associated with teaching practice, the pharmaceutical activity and medicament.

Museo del Baloncesto FEB
If you are a fan of this sport, this is a must as it is the first museum Basketball located outside the United States created for conservation, dissemination and promotion of basketball. It is also the administrative headquarters upcoming World Basketball. It is located in the town of Alcobendas and has a play area in which to practice the sport, physical and virtual way.

Museo Tiflológico
If you come, you'll find the first museum in Spain designed to allow users to touch everything is exposed. Designed primarily for blind or visually impaired, in the museum there are no insurmountable barriers presents in other museums. Inside you can enjoy the cultural heritage of the ONCE and attend exhibitions of blind artists.

MAVA (Glass Art Museum in Alcorcón)
If you visit the museum will find more than 300 works in glass and similar materials, in a continuous renovation, to maintain an attractive and updated collection. The collection thrives on works of the International Award for Glass Sculpture.

Museo del Vino en Valdelaguna
Nestled in the wine area of Arganda del Rey, part of the Denomination of Origin Wines of Madrid, we find this space located in the old cellars of Manuel de Godoy. Inside we find machines and traditional tools, which will help us to understand the process of creation of wine and taste some of the best wines from Bodega de Pablo Morate.

Ulpiano Checa Museum
In Colmenar de Oreja, his hometown, is a museum dedicated to Ulpiano Checa, an artist specializing in historical and Orientalist painting. Located in the birthplace of the painter (the home of the "seven courtyards"), is located the first monographic museum of paintings of the Region of Madrid. The museum is divided into areas where you will discover this unknown painter and his relationship with Colmenar. Inside, highlights the work of 20 square meters "Last Days of Pompeii".

Cocheras del Rey Collection in San Lorenzo de El Escorial
In the garages of the King of San Lorenzo de El Escorial, is located a curious museum dedicated to the world of carriage. Situated in buildings of the "House of the Regalero (king employee)" where the Regalero of the King would collect flowers and fruit from the royal gardens to palaces, the "Stable of the Regalero", where they were the preferred King's Horses and the "House of Travel Crafts" which were cleaned and repaired the carriages.

Royal Barges Museum
In the Garden of Prince of Aranjuez, you'll find a museum dedicated to these pleasure boats that transport you to the time that Aranjuez was the summer residence of the Royal Family, the kings used to navigate through the Tagus and the Ontígola Sea. The oldest and most spectacular boat is the golden gondola commissioned in Naples by Charles II in 1683, for use in Retiro Park.

Las Ventas Tour
Located in the Patio de Caballos from Plaza de Toros Monumental de las Ventas, you will find a museum dedicated to bullfighting. Inside you will see curiosities of great historical value as the inaugural poster of the bull ring, sections on bullfighting in the eighteenth and nineteenth centuries, engravings of Goya, bullfighting costumes, sculptures and an exhibition area dedicated to the bull. Don't forget to ask about activities like bullfighting workshop that allow you to better understand the world of bullfighting.

Museo del Cine de Villarejo de Salvanés
Come to the museum and find one of the most entertaining, fun and educational areas of the Region of Madrid. This is the first Film museum professional and technological of Spain, in the old cinema Paris of the town. This detailed project contains a collection of objects rescued during years of showrooms that allow you to know in depth the evolution of the seventh art, some over 100 years of history.